Our catering expert and Marketing Officer Michael Frost has organised a pizza night for us!


WHERE: Pizzalunga da Carlo, 3 Aspinall Street, Nundah
WHEN: Saturday 20th March 2021, starting 6pm.
HOW MUCH: $15
If you are bringing partners, family or friends, you can just make multiple bookings using your existing buncheur account. As long as we have to the total number of people coming.
Carlo is an Italian pizza baker, a family business in our local area - Pizzalunga da Carlo
The pizzas come in 1 metre lengths with 4 different toppings, cut into 24 pieces to share between 5-6 people usually. We can have tables of 10-12 people and sharing.
DRINKS:
Pay at the bar, special prize of $5 for Peroni beer (Usually beer is around $8-9+)  Wine and champagne is normal price around $30+ per bottle, still quite affordable. Drinks to be purchased at the bar on the night and paid as per order to stop confusion.
All bookings must be done online by Friday night so we have confirmed numbers.

Mick has been with the club for 67 years and also celebrated his 67th Wedding anniversary with his wife Joy on the same day.

Mick has held just about every position with the club, and is still racing nearly every week at age 90 - a true inspiration to us all!


Channel 10 News also did a story on Mick:

A Brisbane veteran is proving age is no barrier to pursuing your passion.
He's dedicated nearly 70 years to the Hamilton Wheelers' Cycling Club and at a sprightly 90 years old, he shows no sign of slowing down. | @SammyButler_ pic.twitter.com/0MfPhdqErc


Our favourite barista Paddy Hughes (ex racer and son of Treasurer Joe) has left us to study in Canberra – best wishes down there Pat!

Meanwhile, a position exists for a barista to operate the canteen on race days from 6.15am – 9.15am.

We are doing a LOT more races at Nundah this year as we no longer have Lakeside as a race venue so a nice little earner awaits anyone interested.

Contact  and Willow will provide more details. PS start offered for this Saturday!!!

Thanks to all our commissaires and volunteers for assisting during the event. We may have missed a few but here are some those who helped out:


Shout out to the 54 Hamilton Wheelers  members who started the Cunningham Classic yesterday; Round 2 of the Queensland Classic Road Series. More than 390 riders from around the state tackled the course from Gatton to Warwick, with warm conditions making for some very interesting racing. Amongst our members, there were a few standout performances, with 7 riders finishing in the Top 10 for their category:
Hannes Venter (MMA, 7th)
Peter Oddsson (MMB, 1st)
Robert Cordle (MMB, 2nd)
Michael DeZwart (MMC2, 2nd)
Rodney Tanner (MMC2, 4th), KOM and Most Impressive!!
Darren Grant (MMC2, 10th)
Wayne Wilson (MMD, 5th)
Thanks to Kangaroo Point Cycling Club, Cycling Queensland and all the volunteers for making this event such a success and thanks also to Glenn McIntosh, Adam Baker and Belbaker Bus Charter for organising and providing the incredible bus service between Nundah, Gatton, and Warwick.

We are hosting Round 3 of the QCRS, which is to be held on October 24th at Lakeside Raceway. Full details are available here https://cycling.org.au/qld/kom-financial-advice-qcrs-round-3-hamilton-wheelers-open
Mick Cole
HWCC Club Captain


During the Covid 19 restriction period…

Darryl Bowes, past member of Hamilton Wheelers and father of James Bowes a current member, sadly passed away Friday 19th June.
Darryl was a jovial and keen masters rider who still kept up with happenings by watching James race and saying hello at many Hamilton races.
Vale Darryl.


It is with great sadness that we advise of the passing of one of Hamilton’s most respected men. Lindsay Green passed away Tuesday 26th May at his care facility in Caboolture. Thankfully he was active and still enjoying life until a few weeks ago, though missing his favourite biking sessions. He would turn 88 on May 31st.

Lindsay has been a Hamilton member since he moved from South Australia many years ago. A noted competitor, Audax hero and Paris-Brest-Paris finisher, Hamilton Club Champion, and above all a true gentleman, he will be well remembered and well and truly missed.

Lindsay will be sadly missed by his wife Connie, children Tony and Jennifer, grandchildren Lauren and Grace and all his cycling buddies throughout the world.

Winning at the Nundah Criterium Circuit - by Fless

Round 4 at Murarrie was the final event for 2019.
The first race of the day a 25 minute +2 laps points race with points every 2 laps,5 3 2 1 points on the line. Then the big race 1 hour + 2 laps. The Hamilton Team had a great first race with a good win by Zach Larson supported by Hanes Venter, Mitch Yard, Peter Odsson, Dave Wadesworth and Ky Parkinson. Zach got in a small break at half distance and took 1st place in the sprint that gave him 5pts that group got caught back and few more moves went and came back, With 3 laps to go The Hamilton riders forced a small gap on the field with Hannes and young Mitch Yarde, this being his first Elite race, setting up a good gap for Zach to hold on for first over the line and taking the double points at the end that gave us our first win.

The main race of the day was a bit mixed for Hamilton we missed the main break of the day and 4 of the team finished in the main pack.

Thanks to all the riders and helpers especially mechanic Bill Tape for all their help!

The Annual Presentation Night is to be held at the Clubhouse this year, on Sat 26th Oct.

Click HERE to register and purchase your tickets by Friday 18th october. RSVP Now! We need to know if you are coming!

Live music, presentations to all medal winners, club champions and major trophy winners – who will they be????

Please bring your own chair.

We look forward to seeing all our friends on this highlight night of the year.

Here are the list of award recipients (so far!)

The Race Director had set a challenging 19km loop for the road race, and included the brutal 2.6km climb of Penny’s Hill, with an average gradient of 7.5% and sections up to 12%. It is located on the range just north of the famous Old Willunga Hill.

A cloudy day and 20km per hour block headwind on the Penny’s Hill section was bound to play a significant part in the day’s results.

The Masters 6 Road Race was three loops of the 19km course, 56km and 1,065 metres of climbing. A triangular course layout with a punchy Range Road section followed by a super-fast downhill and then a false flat to Penny’s Hill ensured a very tough race where fitness, strength and tactics would all be crucial.

Phil said, “As National Champion for the past two years, my coach warned me that I would be a marked man,” and so it was. Attacks started almost from the gun with Brisbane rider Adrian Land, winner of Brisbane Granfondo, going up the road. Teams from Carnegie Caulfield and Norwood continued the attacks, and after the second climb, a lead group of eight competed for the title on the final climb. “A solid pace on the climb and constant attacks meant holding the nerve until the right moment and, with one kilometre to go, I made my move on the final 11% pinch.”

Phil joined the Hamilton Wheelers in 2015, which is also the first year he ever raced. We covered his previous two wins and the compliments he received last year from a fellow competitor about his sportsmanship. It’s an excellent reminder to all of us that you can achieve whatever you want if you put your mind to it. “National Champion three years in a row leaves me happy and proud. I am grateful to my team and for a life that allows me to cycle around the world, meeting amazing people. They all inspire me.” 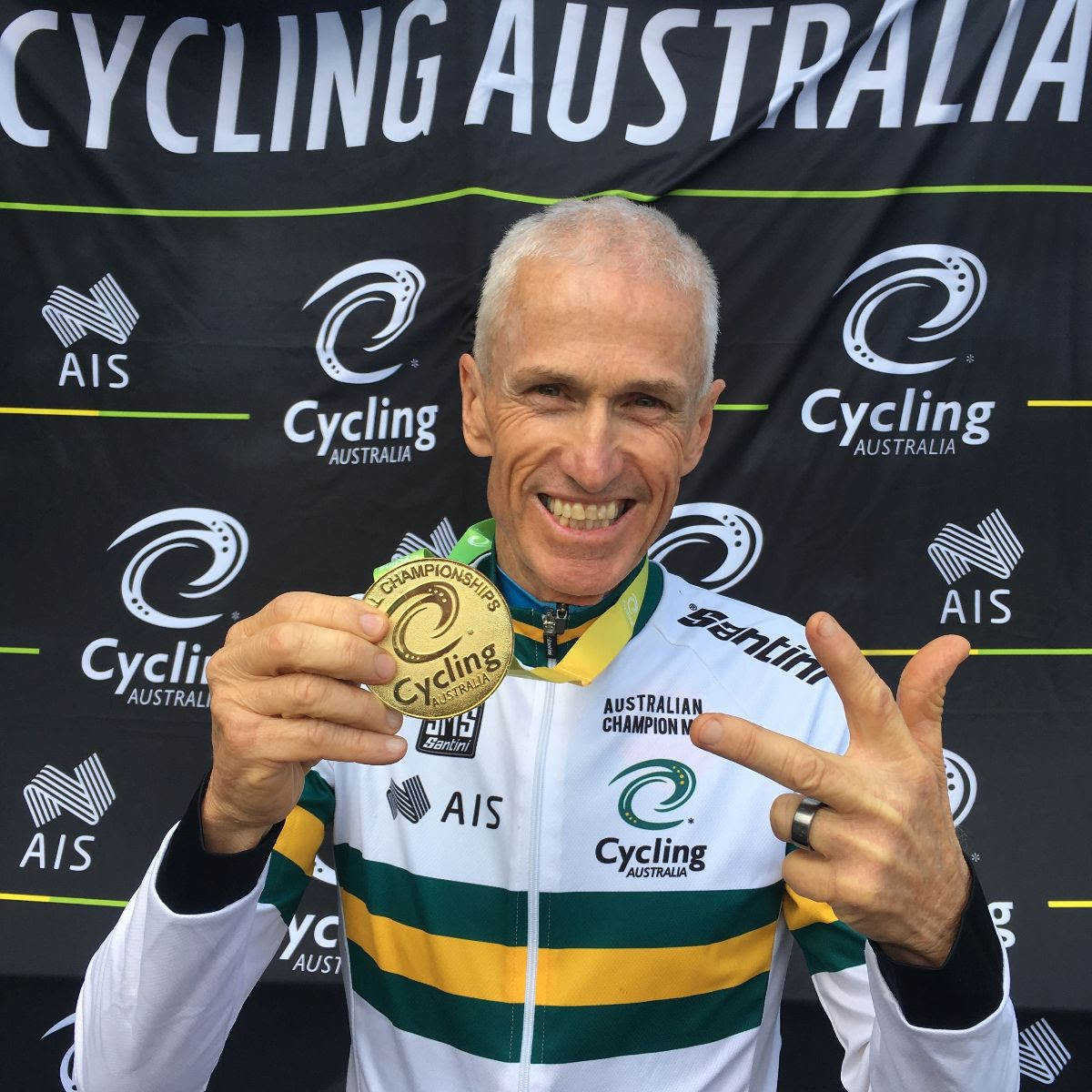